Although today’s Poodles seem to epitomize the life of leisure and luxury, make no mistake, these are real dogs bred to do real jobs. Although it hardly seems possible when you look at a primped-up Poodle in the show ring, the breed was originally a water retriever, a job that requires jumping in the water to fetch waterfowl for hunters or fish for fisherman. Most historians agree that the Poodle originated in Germany, but developed into his own distinct breed in France.

Many believe that the breed is the result of crosses between several European water dogs, including Spanish, Portuguese, French, German, Hungarian and Russian water dogs. Other historians think that one of the Poodles’s ancestors is the North African Barbet, which was imported to the Iberian Peninsula. After that the breed arrived in Gaul where it was used for its hunting abilities.

It is also commonly believed that Poodles descended from Asian herding dogs and then traveled with Germanic Goth and Ostrogoth tribes to eventually become a German water dog. Yet another theory is that the Poodle descended from dogs that were brought out of the Asian steppes by the conquering North African Berbers and eventually found his way into Portugal in the 8th Century with the Moors.

The truth is that no one really knows where the Poodle descended from. Whatever its ancestry, this is a very old breed. One that is here to stay.

Although some say that the Miniature and Toy Poodles emerged shortly after the Standard, many believe it wasn’t until the 1400s that breeders began producing smaller versions of the Poodle – first the Miniature, then the Toy – to delight the Parisian bourgeoise. The Toy and Miniature varieties were created by breeding small Poodles to each other and not by breeding Poodles to smaller breeds.

The Germans used the Standards for fishing. The french used the Standards for duck hunting, and the mid-size Miniatures to sniff out truffles in the woods.The tiny Toy Poodle’s main job, on the other hand, was to serve as a companion to the nobility and wealthy class. In the Renaissance well-to-do owners often carried their Toy Poodles in their large shirtsleeves, leading to the nickname ‘sleeve dogs.’ 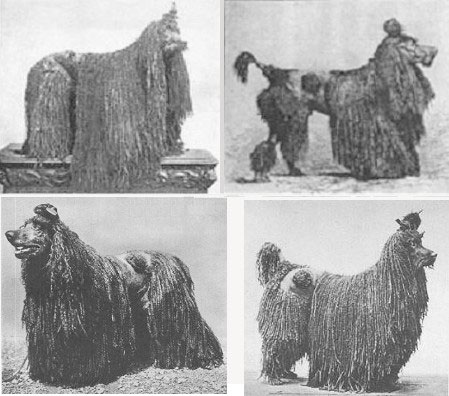 The Poodle Club of America was founded in 1896, but disbanded shortly thereafter, however, Poodle enthusiasts reestablished the club in 1931.

Apply for a Poodle Mojo Puppy

© 2023 All Rights Reserved | design and maintained by Poodle Mojo